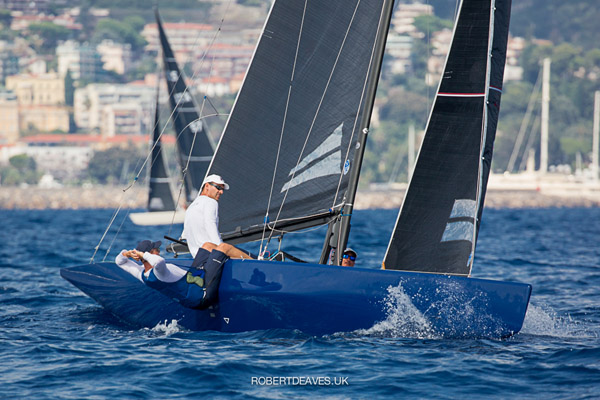 After a three hour delay on shore, the fleet was sent out in a 6-8 knot westerly that promised more than it delivered, testing the crew’s skills and patience. The first race got underway mid afternoon and the fleet didn’t return to harbour until early evening, but added two more races to the board allowing that all important discard to come into play.

Aspire got the best out of the start of Race 5, tacked to the right and was gone, extending for a huge win in the tricky conditions. Next at the top was Otto (NOR 68, Bent Christian Wilhelmsen, Lasse Berthelsen, Luka Strahovnik) and Caracole (SUI 214, Bernard Haissly, Berthoud Nicolas, Daniel Stampfli). Otto hung onto second, though was later disqualified after a rare protest, leaving New Moon II in second with Marie-Francoise XXI (SUI 232, Jurg Menzi, Jurgen Eiermann, Bo Selko) third.

New Moon II Race 6 got away under U flag after the first general recall of the week. It was a rather scrappy start for many, but Caracole soon was leading to the right and rounded ahead from Marie-Francoise XXI and Aspire. The downwinds were long and tortuous in the fading breeze, but Caracole hung on to the lead until the last 50 metres, when a left shift on the approach to the line allowed Aspire to roll them and win by the slimmest of margins.

Przemyslaw Gacek, middleman on Aspire said, “We had a great start in the first race. At each mark we gained more over the other boats, so that was quite surprising for us. We used spinnaker no 2, which we thought might be too big for us, so we are very happy.”

“In the second race there were lots of boats over the line, and on the restart we didn’t do it very well, but also we wanted to be careful. We went round the top in second or third and we were really fighting a lot with Caracole, which was doing an amazing job. At the second rounding they were ahead, but then at the end we managed to overtake them and won by half a boatlength. So that was great day for us. Great learning as well. We had yesterday off so we were really trying to think what went well and what went wrong. We also have a very long list of things we can improve.”

On the fleet, “I think it’s a strong competition. We only did some training on the day before the event with some other boats, but I think the fleet is very strong and some have sailed the boat for a long time. But we have a strong team. Mateusz is the main guy and we have Simon as well. I’d say with such a crew you have to go quite well.”

“I love the boat. It doesn’t matter if we are behind or ahead, it is great just to go head to head with the other boats and I was very excited today. I am looking forward to tomorrow and for further sailing.” 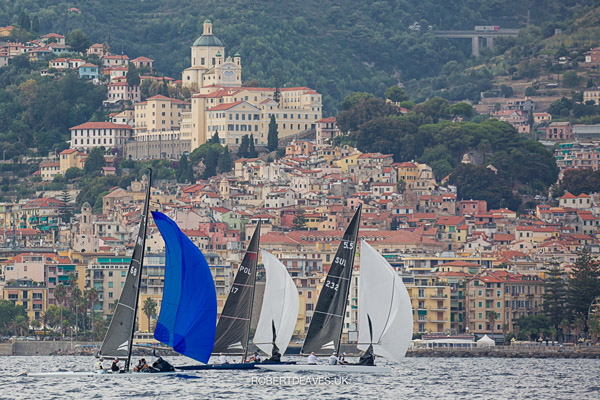 Otto would have had the next best day with a 2,3 but lost the second place after time in the protest room.

Bent Christian Wilhelmsen explained their day, “We had two hard races. Tough with choppy waves, not our best conditions, but we made some good decisions and had some good starts, which helps a lot and we got free air, and that helps a lot. You need space and we managed to keep away from all the boats with height and speed.”

“But we were struggling. It’s not an easy situation for the helmsman, with the waves and not so much wind and a shifty wind as well, but all in all I am happy with the day.”

‘He concluded, “The last race tomorrow is going to be an interesting one.” 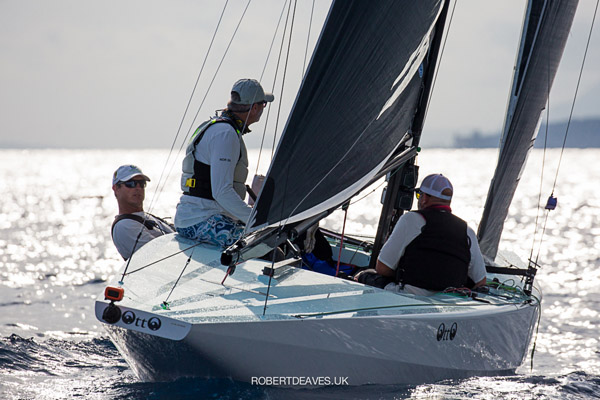 Racing concludes on Saturday with two races possible, Aspire has a four-point margin on Momo, with New Moon II a further three points back. So it is a long way from being over. Behind them the points are close with just 12 points separating the next six boats. The forecast is not particularly encouraging.