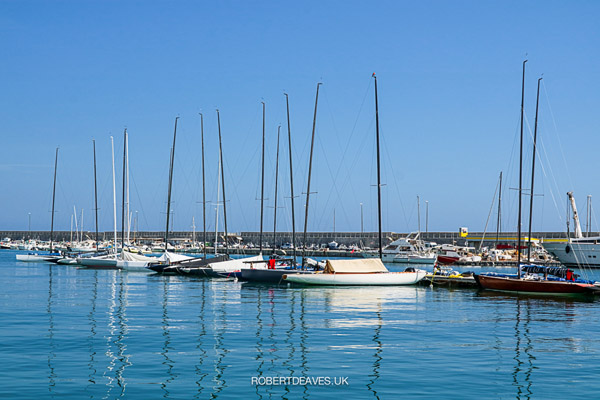 No wind stops play on Day 3 of 5.5 Metre Europeans in Sanremo, Italy

Lack of wind forced all racing to be abandoned on the third day of the 5.5 Metre Europeans in Sanremo, Italy. The sailors patiently waited all day in the searing heat, only to be sent home disappointed.

While the morning remained largely windless, a light breeze from the east started to develop early afternoon, but never became established and at 15.30, the race committee called it off for the day.

There are a lot of previous champions and Olympic sailors present in the fleet, both medalists and hopefuls. One of them is Lucien Cujean, from Geneva, Switzerland, sailing on board Shaolin, SUI 226. Having placed 13th in the 49er class at the 2016 Olympic Games in Rio, he has also qualified for Tokyo, and with normal Shaolin helmsman Cyrus Golchan out of action, Cujean was asked to step in, even though he has never set foot on a 5.5 Metre before. 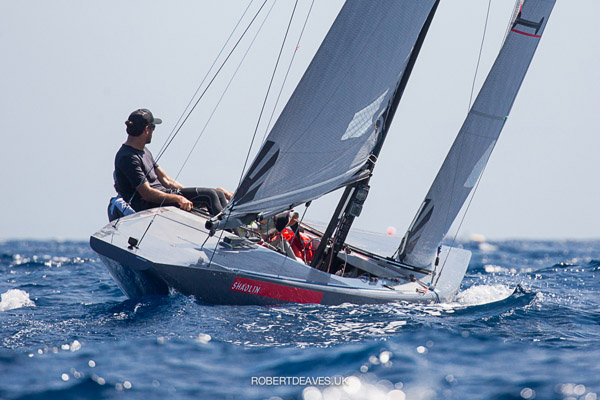 “I am really enjoying these few days with the 5.5 class. It’s very rare to sail such a nice boat and such a technical boat, but I need more practice with the team. I have not sailed them before, so only three days now here in Sanremo. Since my childhood I was always looking at Star class or 5.5 Metre class racing on the lake, or outside Switzerland, but I feel like it a great opportunity to be able to race on these boats. And I feel very lucky to be here.”

On the fleet, “There is a lot of heritage in the class and some very good guys in the fleet, past Olympians, world champions and I think it’s great to race against these teams. I am used to sailing on the 49er so it’s a bit faster and a different racetrack. Also the GC32, on the foils. It’s a new thing for me but it’s always good to go back to the basics and just play the shifts and play the fleet and try to beat all these guys.”

“Steering the 5.5 is very nice feeling, very smooth, every detail counts. In the modern class you also have the trim tab. Yesterday we were very lucky to have nice easterly 12 knots with some waves, so it was technical downwind and you can pump on the waves, trying to reach 7 knots on the surf. It’s a great feeling.”

“I am 31 years old and probably one of the oldest in the 49er class, and I think after the 49er campaign is finished, it would be great to try something else afterwards and the 5.5 would be a nice class after my Olympic career is over.”

Ali Baba was designed by Doug Peterson and built in 1994 by Melges Boatworks, and proved to be the most successful design of the 1990s. Seven sisterboats were built by Melges Boatwork to this design, including Joker (FRA 50, Jean-Baptiste Polaillon, Eric Polaillon, Pierre Gautier), which is also in Sanremo, though predates Ali Baba by one year. As DoDoToo, FIN 40, Joker was skippered by Henrik Dahlman, and won the 68th Scandinavian Gold Cup, in Hanko, Finland, in 1995. There is a lot of pedigree in this fleet.

The second placed Evolution is the eye-catching Criollo (GER 30, Andreas Christiansen, Michael Kurtz, Moritz Christiansen) with its immaculate teak decks. Designed by Warren Muir of Australia, and built in cold laminated wood by Hermann Egger in 1982, Criollo was one of three such built from an original design commissioned by JP Jenni. Owned since 2007 by Andreas Christiansen, the boat is absolute beauty following a major refit and remains a fast Evolution. 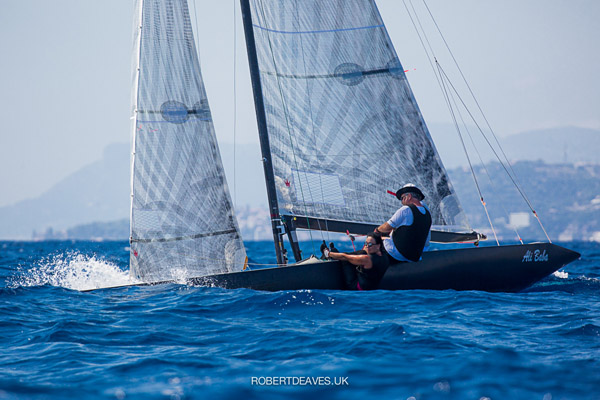 Christiansen tells the story of how he came into 5.5 Metre sailing.

“I was invited to helm this boat in 2001 and half an hour later we started the first race in Flensburg and at the first mark we were in first place ahead of Jochen Schümann, so I immediately got a very feeling about this boat and was quite happy to have it.”

“Then at the world championship we broke the backstay because the boat came from Lake Zurich and they were only fixed by rope and not for strong winds. The good performance ended after two fifths, and in the end we placed 15th out of 40 boats.”

“A couple of years later the owner had renovated the boat, put a carbon mast on it and new rudder, so it was for sale. Gunter Ahlers encouraged me to buy it. He is an expert in 5.5s and then he said I must buy it or the current owner will add an electric engine, so “you have to rescue it”. That started in 2007 and since then we are racing this boat whenever we can, but time is limited anbd we cannot race like everyone else, but we have enjoyed it.”

His last big event was World Championshiup in Porto Santo Stefano in 2014, but he “normally competes in the Robbe & Berking Sterling Cup 2020 in Flensborg every year, where I was born, my home waters. But I also own a Dragon and a Nordic Folkboat, so I have too much choice.”

“This boat was designed by Warren Muir and Ben Lexcen. It has a very sloped keel, and it is good in rough weather and waves and then it does very well. When we were in Curaçao, where there are always big waves and wind, we were always top five at the first mark, as long as we didn’t get too much water in the boat.” 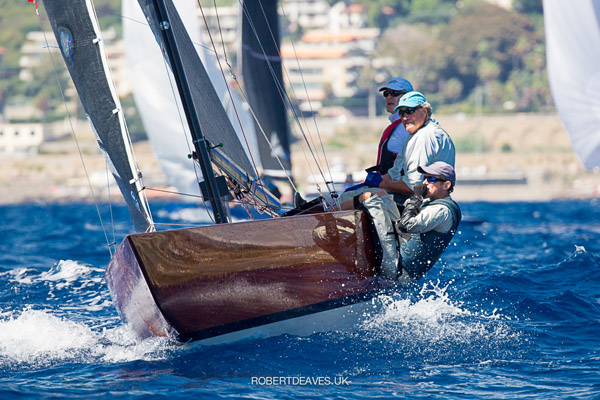 There are now just two days left for the fleet in Sanremo. Racing concludes on Saturday 29.